Paddle Wheel Boat
Ok. Learning a lot while preparing boat's transformation to playhouse. Sometimes, well usually always, when doing something fo the first time, I go overboard with saftey. I knew I went way overboard on saftey, when I installed the 3" thick deck, which propably weighs 100s of pounds, but did not realise I made the bottom of the boat about 2" thick as well. Well, I know what happened. I looked at my fat body and the big beefy body of my employee, and figured we would just crash through the bottom if I did not make it thick enough. :) Just courious what the boat's draft would have been if I had not made the hull so heavy. Any way, lesson learned. About finished with the drawing for the next boat. Once again was going for saftey and drew an nice set with a 5' hull, did not what to worry this time about  swamping boat, but when look at how high hull would be on my trailer, decided too dangerous to get on boat to work on. Did some research and found most hull plans were no larger than 3'. Even the house boats had only 3' hulls. So in essence just doubling the hight of the original hull sides.


After rethinking about the boat, I determined I could fix the depth of the paddlewheel by just removing the outer circle and making the paddle wheel only 3 foot diameter. This would remove a lot of stress on the propulsion system, but I still will have trouble steering because of the size of the cabin to the hull. The wind will still have a devastating effect on steering. I could then cut off the cabin, but then it becomes a paddlewheel skiff. So I think I will just save my energy for building a new boat.


OK. Had more speed from boat, but.....was very hard to steer. Came to the conclusion that I built a sailboat. The wind was just too powerful and I could only go in one direction. Also decided that the boat rides too low in the water and thus makes the wheel work too hard. The wheel has 6" blades and should only be at least no more thatn 1' in the water, but the actual depth is more like 2'. The stress on the paddle wheel caused the  gearbox once more to come off the rear cabin wall (although we did change its position and did not reattach it with bolts through the entire wall like before.) I could raise the paddlewheel and tinker some more on the rudder linkages, but  think I will set this boat aside and redesign a deeper hulled boat. Also want to tinker with hydraulics (no more chains and belts) and make a side wheeler. Hate to set this boat aside, because it is a pretty boat. Maybe I had a subconcious premenition, because I never did paint the name back on the boat after taking the second deck off.


Figure boat will make nice float in next Christmas parade, and then a fun house for the grandkids. My wife wants me to convert it to bike power (which is the power source of the original plans) for the kids. 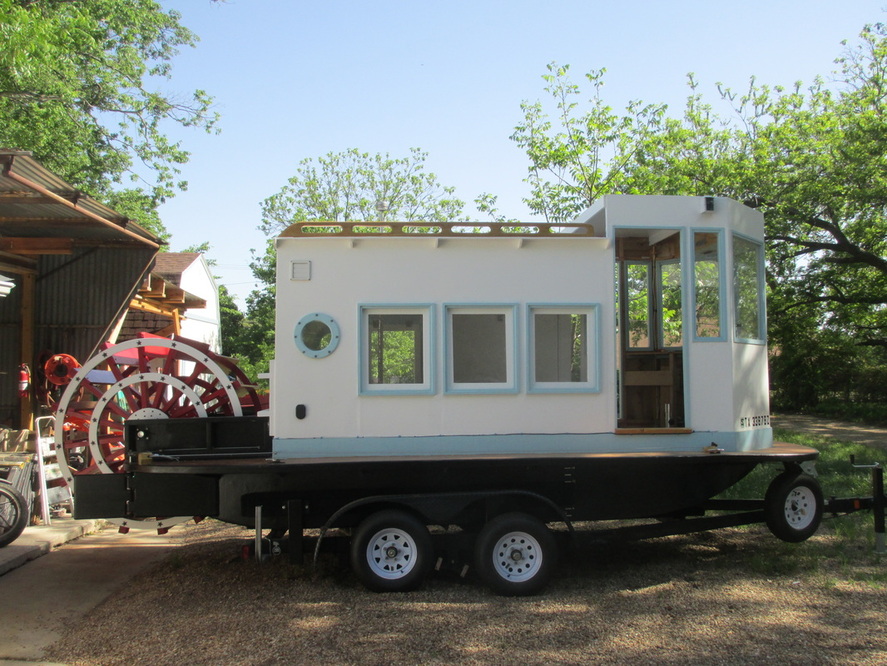 Here is the Theresa Gail, all painted up and ready for launch tomorrow! 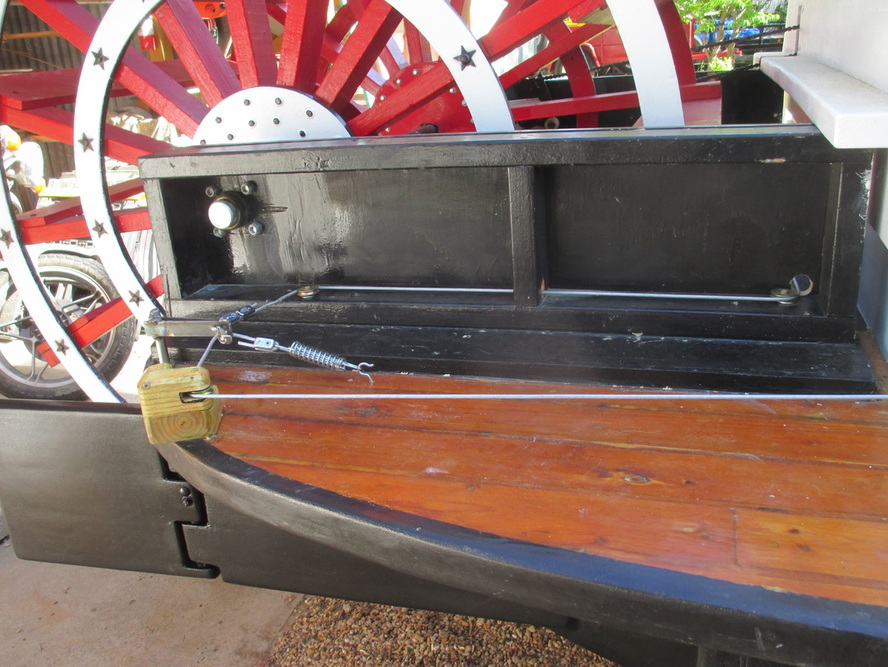 Added spring into steering cables. This prevents any slack that could cause cables to miss pulleys. 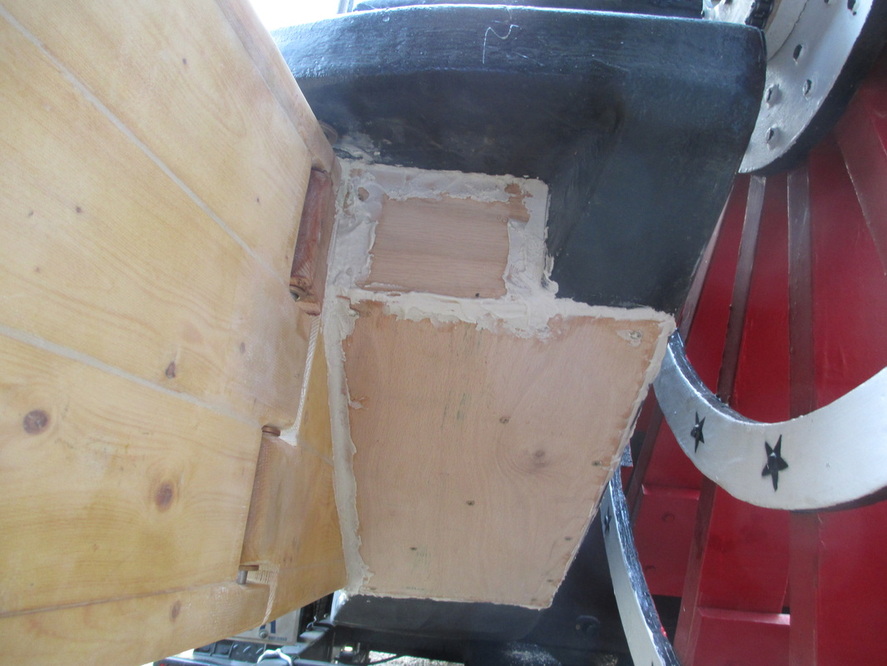 Having to run steering cables on outside of cabin. Excited to try boat again this Tuesday. Believe I solved power issue. When I would rev up the motor, I noticed the engine tilting. Apparently when the clutch would engage and cause the  belt to tighten, instead of engaging the torque converter properly, then engine would tilt. I placed a brace between the engine and cabin wall, which now prevents this tilt. The belt now engages the torque converter.

Have rudder all clothed and resined. Just waiting to sand and paint. 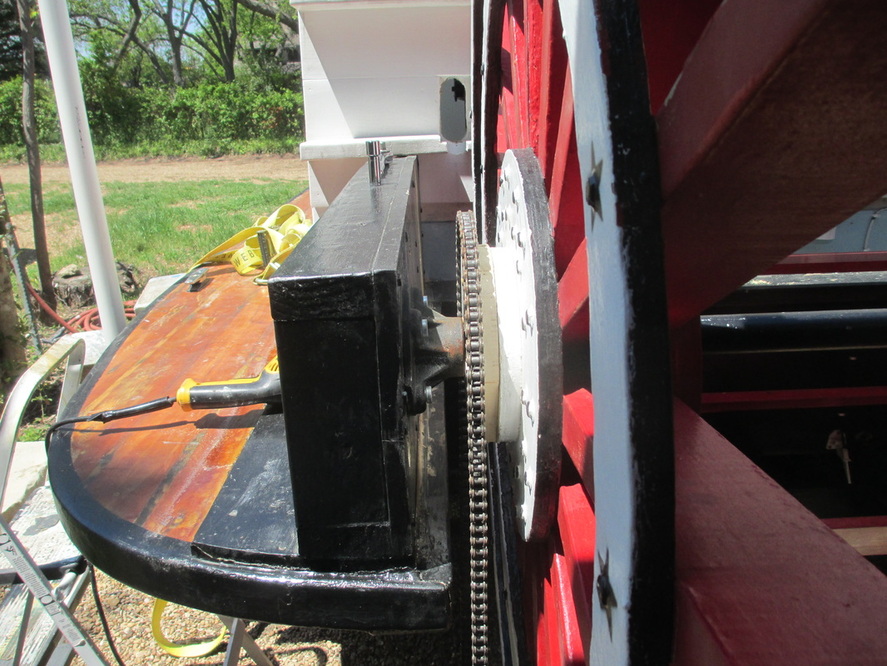 With moving the boat on and off the trailer, dropping it on the ground once, the paddle wheel became a little warpped and caused the chain to rub against it a little. To solve this I added an 1" spacer, which cured this problem nicely. 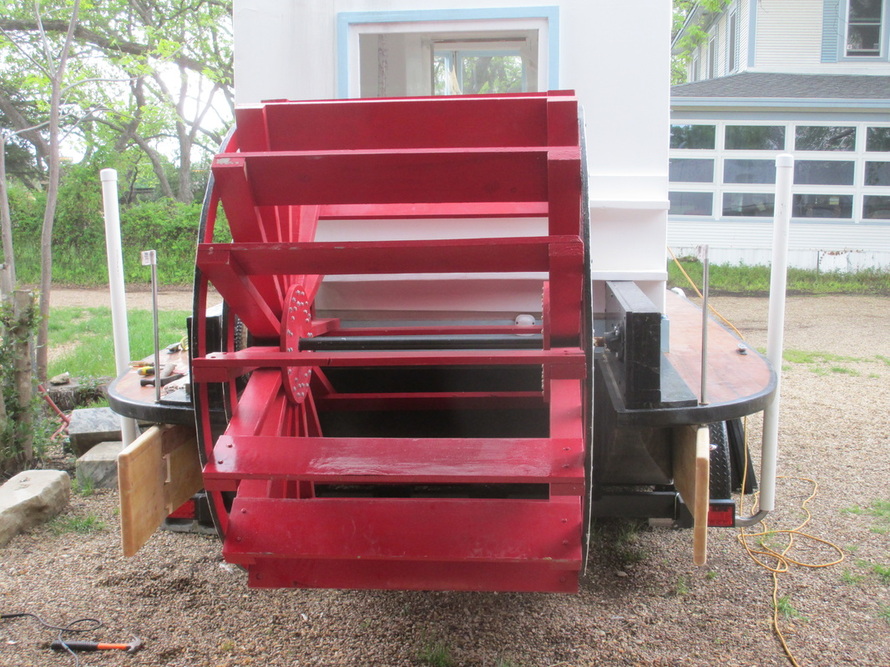 Here is a rear view. Just imagine them working in tandem. Will have to install a stop screw to prevent any bumping into the paddelwheel. If this works well, will design this type of rudder into my next boat. 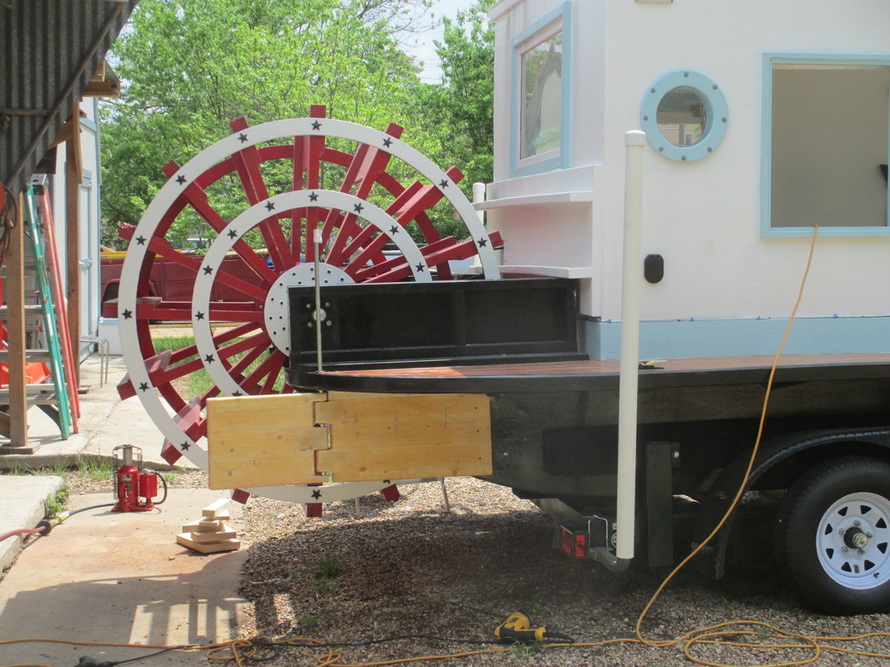 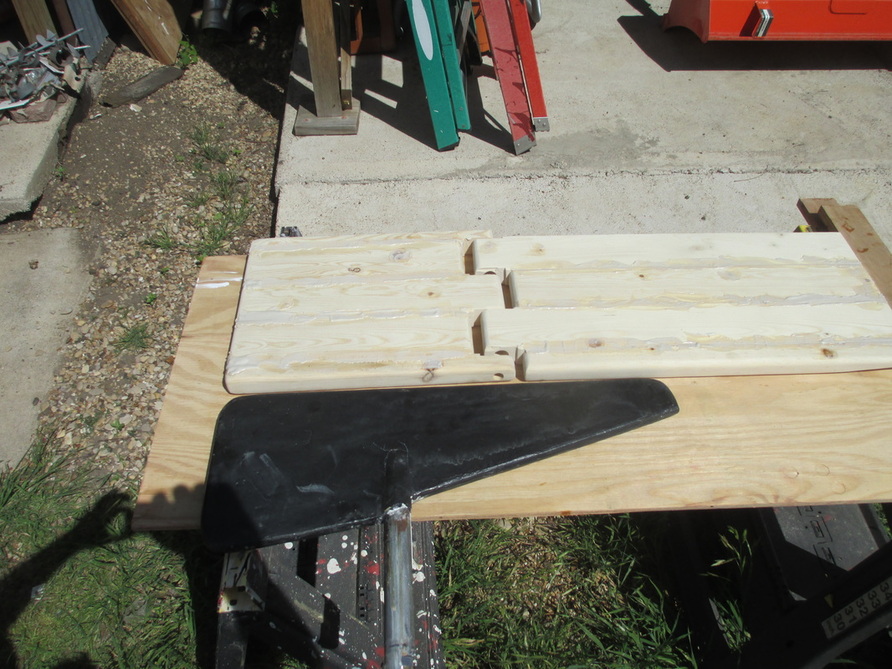 You can see by this picture the difference in size of the new rudder. Then times it by two.


Gotten the rear rudders and the fin supports built and covered in fibercloth. Now just a little sanding and attatch them to the boat. While I am waiting for the resin to dry, we tackled a few other items that needed addressing. The chain on the paddlewheel tended to rub against the wheel, so we installed a 1" spacer. This then led us to also move the gearbox so the chain remained straight. Have filled in the forward rudder hole and removed that rudder running gear. I do have more photos, just need to get them downloaded. Seems this has been family and relatives month, busy entertaining everyone.


Been noticing a lot of blogs have the newest items on top . I think I will make a page like that, but also keep one with the oldest at top for those who like to do the old fasion method and begin a good book from page one and not by reading the last chapter first.


Alrighty then! Although steering works, the boat had a large turn radius. Will do some reconfiguring of the hull and rudder. Going to remove the rudder from the bow and install two rudders aft, one on each side of paddle wheel. There are three reasons I am doing this: easier to get boat onto trailer without worring about rudder positoin, able to ground boat nose in so can take on people from shore without damaging rudder, and lastly seems water level is a little above the rudder's pipe. Rudders will be hooked together in tandem.


Steering works. Had a successful launch today. Was able to steer a figure 8, but wind was so high today that had trouble maintaining a course. Boat was get back onto trailer under power. For some reason the boat list to port, and I would like to see if can get a better engine configuration to get more power from motor. Would have a new movie, but wife was so excited to see the boat actually work, that she forgot to take any.